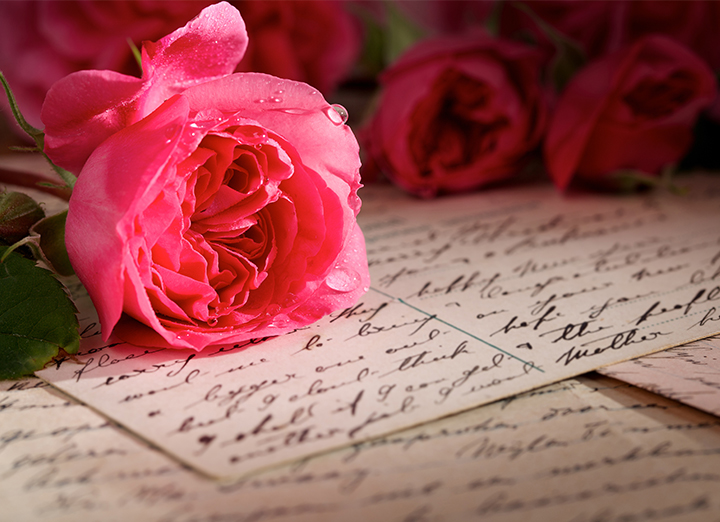 The day after my Grandma Cates passed, we found a love letter written to her by my Grandad the year before they married.  None of us had ever read the love letter before this day.  We were amazed by the symbolism it foreshadowed in the context of her passing.

This evening, at the age of 91 years, my Grandma Cates passed from Earth to Heaven.  Jewell Marie Cates was born February 4, 1919.  She was preceded in death by my Grandad, Laverne Cates, whom she married September 22, 1939.  Jewell went to Heaven just hours before their 71st Wedding Anniversary.  I remember celebrating their 50th and 60th Wedding Anniversaries on the Cates Farm in Atwood, OK.  They often talked about celebrating an anniversary together in Hawaii.  They never made it to Hawaii, but their 71st Wedding Anniversary will be spent together on the beautiful shores of Heaven.

Grandma went to Heaven last night.  Today, while looking through old photographs and Grandma’s special memories, we found a love letter written by my Grandad to my Grandma before they married.  We read it and wept.  It is not only beautiful, but it foreshadowed this season of their love story.  The fact that she moved to Heaven just hours before their anniversary along with the content of this letter proves the point that God writes the BEST stories!

Jewell & Laverne during the early years.

My Dearest of Jewells,

I was sure glad to get your letter today, kindly unexpected.  I sure like your promptness.  We just got back from church and decided I had better scratch you a line.  Every time I get a letter from you, it makes me fell like happy days are here again, too.

I haven’t went with a girl yet.  Not a single one.  They don’t look good enough for me now.  I hope you don’t work too hard.  If you work half as much as you did down here you’ll do a lot of work.

I’m working some of that wild energy off of Dale now.  He is doing better already.  He went to Holdenville last night to see Ruth.  I sure felt bad not getting to go see you.  I sure wish you still lived at Holdenville.  I believe I would come to see you more.  It seems like two months since I’ve seen you.  If you miss me half as much as I miss you, you are almost dead.  I didn’t know I could ever love a girl as much as I do you.  I had rather tell you that to your face, but it seems impossible at the present.  I sure hope you fix that with your papa so you can come down here and visit with your mother and visit me most of that time.  I hope you come before the 15th.  I don’t think I can wait that long.

If any of the boys get cute with my Jewell way off up there, you just let me know and I’ll tame them down.  I wish you would hurry and send that picture so I’ll have something to look at for pass time.  I’d like very much just to have just a small picture or anything of you.

I sure hope you come back in September.  I don’t see what will keep you from it.  If you do, I will try my best to show you a good time.  I don’t see how I can do without you two more years.  I may pull that back some time.  If I can see any slack.

I’d take time out any time to write to you or see you.

I wish you were here to put me to bed and I wouldn’t have to write this.  You don’t realize how much I think of you.  There’s something different than other girls.  I guess I had better close and go to bed.

With lots and lots of love,

Save your kisses for Laverne Cates

Jewell did return to Laverne in September.  Jewell began her trip to Heaven on the last day of summer.  As the seasons changed, the full moon shown in the Northern Hemisphere welcoming the first day of Autumn for the first time since 1991.  As a child, I remember how Grandma and Grandad never left the farm much during the summer; there was always too much work to be done.  When Autumn came, they would take a trip to the Oklahoma State Fair to celebrate their anniversary.  Jewell Marie, a devoted farm wife, waited until the end of the summer season to make her final move.

Since Laverne moved to Heaven in 2004, Jewell’s life was significantly marked by Alzheimer’s.  During those years, she received care in her own home by her oldest son and his wife, Bill and Tochie Cates.  Many prayers were sent to Heaven by the family asking the Lord to please take her home as her condition worsened.  To many, it would seem she had been abandoned by a merciful God…not so.  Though she slipped away and eventually forgot us all, she could still pray the most amazing prayers and sing the lines of many of her favorite hymns.  She loved to sing “Higher Ground.”

Jewell could have made her final move at any time, but we find it extremely significant that she made her move at the end of a season just hours before her wedding anniversary.  God writes beautiful stories.

We sang this old hymn in Grandma’s honor at her funeral service.  I’ve never heard that little Atwood Church of the Nazarene filled with such power as everyone sang in unison!

I’m pressing on the upward way,

Lord, lift me up and let me stand,

By faith, on Heaven’s tableland,

A higher plane than I have found;

My heart has no desire to stay

Where doubts arise and fears dismay;

Though some may dwell where those abound,

My prayer, my aim, is higher ground.

I want to live above the world,

Though Satan’s darts at me are hurled;

For faith has caught the joyful sound,

The song of saints on higher ground.

I want to scale the utmost height

And catch a gleam of glory bright;

Though my Grandma no longer lives here, and I must wait ’til Heaven to see her again, I am so encouraged to surrender to God’s perspective.  I too want my feet to be planted on higher ground.  My tears over her passing have mostly been for the joy set before those of us who believe.  I am filled with that joy knowing that, because my Redeemer lives, I can live above the cares of this world until the day I am united with Him in Heaven.